Well it was all going so well! The standard of the beers in Sainsbury's beer hunt has been excellent so far so I suppose it's almost inevitable that some are not going to be so great. Maybe I am being a little harsh but this wasn't up to the dizzy heights scaled by previous beers I'd tried. This one's from Joseph Holt up in Manchester. 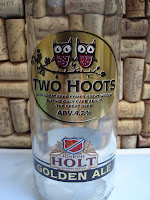 Pleasant malty aroma (coming from crystal malt as I understand it) and a decent hoppy bite on the sweetish finish, but overall it was nothing spectacular.