Is there a better way of relaxing after work on a cold evening than with a bottle of imperial stout? Yes, of course there is; you can relax after work with a glass of impy stout that's aged in whisky barrels to enhance the flavour. Or, even better, get yourself the aforementioned bottle, and get yourself a glass of the whisky that was the previous inhabitant of the barrel... Now that's got to be the way to do it. 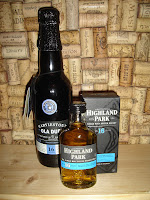 Harviestoun's 'Ola Dubh' 12 was one of the highlights of my first blogging year, and Orkney's Highland Park is a whisky that usually features in many people's 'must try' lists - something I'd agree wholeheartedly with. For someone like me who only occasionally delves into very peaty whiskies Highland Park in general has long been a destination of choice - complexity through the peat without going so far as making it the whisky's raison d'être. It was great to get hold of different versions of both a whisky and a beer I've really enjoyed in the past - whisky geek heaven and beer geek heaven rolled into one!

Highland Park 16 was 'crafted exclusively for travel retail' so it was never widely available on the UK's whisky shelves. It was withdrawn in 2010, only featuring as part of their range for a little under five years.*  Presumably during or after the five years or so of release the guys at Harviestoun nabbed a few of the barrels to age the Ola Dubh version of their Old Engine Oil, and the Ola Dubh 16 is the result.

The beer... It's got a lot more power than I remember the 12 having, this time the whisky really hits you - even more surprising given I was drinking it alongside the whisky itself! However those whisky notes die off pretty quickly in a finish that reveals more of the smoke and coffee notes.

The whisky... It's got loads of citrus-fresh aromas; sweet orange dominates but there is spice, nuts and sherry too. On the palate it's more floral, with more bite than I was expecting from the nose - in a good way. It's a rich, self-indulgent whisky with a smoky bonfire finish. It's very accessible, and it makes you want to go back for more, and more...

Probably not the most detailed tasting notes I've ever written, but this was all about the combination - and what a combination - grab both if you get the chance!

* From the Highland Park website entry.
Posted by Gareth at 13:20

Email ThisBlogThis!Share to TwitterShare to FacebookShare to Pinterest
Labels: Half and Half, Harviestoun, Highland Park, Imperial Stout, Orkney, Scotland, Whisky