Note: This is a post I wrote for the Whisky Shop's W-Club Blog so it might come across as a bit 'worky.' I thought other readers might find it interesting though so here it is. Also worth mentioning that the Paternoster tasting I mention in the final paragraph has been and gone. 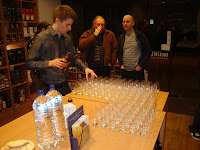 The Whisky Shop Nottingham's Burns' Night tasting was hosted by Colin Dunn of Diageo. Twenty years ago Colin sat the Wine and Spirits Diploma that I have just got through and it doesn't sound like he ever looked back. Before working for Diageo he worked for Suntory/Morrison Bowmore and Van Winkle. His job title may be 'Whisky Ambassador' but having met him and watched him in action that seems a little formal, he's more of a whisky showman, using his own enthusiasm and experience to act as a catalyst for the whiskies to express thaemselves. Diageo have an incomparable portfolio of distilleries; even for someone with Colin's impressive energy there's a lot of whisky to show off. 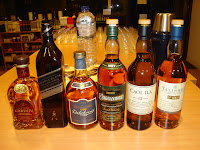 First up was the Cardhu 12. This is one of Diageo's best selling single malt whiskies* - something that might be a surprise to many when you consider big hitters like Lagavulin, Dalwhinnie and Talisker are part of their team. The reason is that it's a massive seller in Spain, where almost all of it is sold. Often it's mixed; sold as part of a long drink - it would be well worth trying as a part of the highball recipe featured in the last Whiskeria magazine - at least once we get back to summer. It's grassy, sweet, rich and moreish, with notes of marzipan and cinder toffee. A perfectly smooth dram, and one add to the list of 'whiskies to convert the uninitiated.' 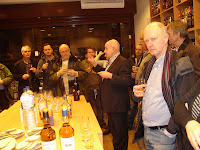 Johnnie Walker Double Black is a new addition to the Johnnie Walker family, only having been released last year. The figures on Johnnie Walker sales are staggering; listening to Colin recite them is kind of like watching Brian Cox talking about the history of the universe on the television - there are some big numbers involved. Colin described the Double Black as 'Black label in HD.' The fruit and the smoke dials are turned up a couple of notches; there's extra lashings of Caol Ila and Lagavulin. Some forty or so different whiskies go into the JW blends, all married together for six months or so at the Cardhu distillery, before rolling out to all corners of the globe. Like them or loathe them blends are what whisky is to many people around the world, and Johnnie Walker is the biggest of them all. Diageo are a blending company that also release single malts, and this is their number one tool to bring whisky, and particularly in the case of the Double Black, peaty whisky, to emerging markets in Brazil, Russia, India and China. Without Johnnie Walker the single malts that we enjoyed in this tasting probably would not have survived; it's a whisky ambassador in a bottle. 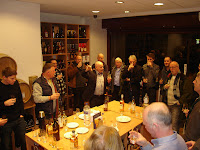 Speaking of ambassadors, it's time for chocolate. Not Ferrero Rocher as such, but Green & Black's organic 70% cocoa dark chocolate - an ideal accompaniment to Cragganmore Distiller's Edition. Much of Cragganmore ends up in blends for the South American market. This, though, is the product of an experiment that led to the re-discovery of older, more traditional maturation vessels, in this case port pipes, which is what many whiskies were matured in prior to the lifting of prohibition and the prevalence of bourbon casks. It's a meaty, chewy whisky, with notes of cherry and smoke. It's not as 'porty' as I remember some older vintages being, but that's not a criticism, it really is a lovely drop.

After the turn came the Dalwhinnie Distiller's Edition, another product of cask experimentation, although this time perhaps on more familiar territory in Olorosso sherry. The regular fifteen year expression is all bourbon-cask matured  up in the highest of the highland distilleries. Around a hundred barrels a year are tweaked; given an extra six months or so in sherry casks to add an extra layer of complexity. It's nutty and silky smooth with caramel and barley sugar notes - like liquid fruit cake.

Talisker 57 Degrees North came with a challenge, and some blue cheese. The challenge was to hold it in the mouth for as long as we did with the Cardhu - and it certainly led to some red faces and deep breaths afterwards. It's a big bruiser of a whisky, the ultimate reflection of Skye's rugged landscape. Less of a whisky for dwelling on than one to fight off the winter. After a few seconds in the mouth the characteristic Talisker pepper and chilli heat explodes, and all of a sudden it feels like you are surrounded by a warming cloud of peat. Normally whiskies at (or in this case close to) cask strength are improved with a drop of water, but this is all about the power. One customer described it as 'a liquid fisherman's friend' - what more could you wish for in your hip flask than a drop of this to restore the constitution?

Caol Ila, as a single malt, is a relative newcomer, only having been available for just over ten years, despite the distillery having been around since the 1830s. Again most of Caol Ila's destiny lies in the Johnnie Walker blends, but it has established itself as one of Islay's best selling single malts. It's mainly matured in first fill bourbon casks, the honeyed notes complementing the burnt peat nose and showing off the clean, briny medicinal iodine qualities. 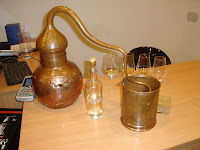 To finish off, Colin broke out the Lagavulin Distiller's Edition. Its secondary maturation is in Pedro Ximénez sweet sherry casks to give it a smooth, fruity quality on top of the tarry leather and thick smoke notes. This has always been a somewhat divisive whisky, but for me it's magnificent, and a perfect dessert to the evening's main courses. I love that almost liqueur quality that it has - Colin described it as having similarities with Grand Marnier.

Many, many thanks to Colin for making the trip up to Nottingham, I think everyone really enjoyed the evening and I hope we'll get a chance to meet up again. Colin is re-appearing next Friday in The Whisky Shop's Paternoster store. For those that are going, it'll be cracking evening, and I am terribly jealous. For those who are not going, if there are tickets left, cancel whatever plans you have and get yourself down there!