Apparently made to have a balance between the malt and the hops. Fair enough. 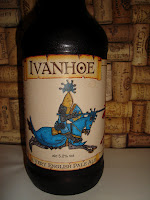 It's a really refreshing beer considering the 5.2% abv - enough of an orange-pithy hoppiness to keep things interesting and malty enough to give it some body. Rather moreish though, possibly rather dangerous for such a strong beer - not that I'm complaining!

It's not as good as the 'Bad King John,' lacking a little bit of character to be at that sort of level, but better than some of the other, rather dull offerings in the hunt.